skip to main | skip to sidebar

I've seen a few of these ridiculously fun DIY misting sprinklers for kids around blogland and had to try one myself. I dunno who gets credit for the original idea, but you're awesome. 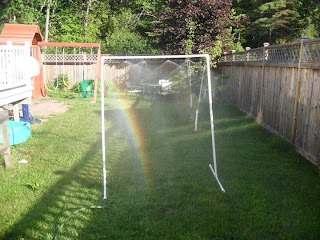 All it took was a couple pieces of 10 foot long PVC pipe (3/4 in diametre), two T-joints, two elbow joints, a 'female' hose connector piece, three male adapters, three end caps, and four half-circle mister jets (check the irrigation section of the hardware store). I know virtually nothing about plumbing, but all the parts were labelled and fairly easy to find. The only thing that tripped me up was that I couldn't find end caps without threading, so I had to make a separate trip to the store to buy adapters to go between the pipe and the end cap.

Hubby was a brave man and let me borrow his drill and a saw (neither of which I've used before!), as well as a measuring tape.

So, you want to make one, too? I'd love to say I have a picture-filled tutorial, but I don't: with learning how to work a drill and saw (hacksaw, I think?), and trying to keep my two little helpers in check, there was no camera time. Luckily, this project is super easy and goes together in 10 minutes flat.

1. Cut the first PVC pipe in half. These five-foot sections will be the risers.

2. Cut the second PVC pipe into one 4-foot length, and four 18-inch lengths. You don't have to be super precise in the measurements. Yay! These will become the top and 'feet'.

3. Drill four approximately equally spaced holes in the top pipe piece. I put mine in a straight line, but you could probably space them out and have water going everywhere.

4. Screw the mister jets into the pipe. The jets are threaded and go in pretty easily with fingers. The holes I drilled were too small, and I had to use a larger bit to fit the jets. Better to start too small than too big.

5. Add a elbow joint to each side of the top pipe. Press it on really good. Glue it (and the rest of the connections) if you like. I didn't.

6. Push a riser pipe into the other end of each elbow joint.

7. Put a T-joint on the bottom of each riser.

8. Put a 'foot' piece in each of the lower T-joint openings.

9. Add your end caps (or adapter/end caps) to three of the foot ends.

10. Add the female connector to the remaining foot end.

Attach your hose to the female connector, turn on the water, and watch your kids go crazy!

The only downer to this project for me was that the price for all the parts was generally quoted at $14-$20. Filter that through over-priced Canadian stores and it came out to about $43 for me. Steeper than I'd like, but I know it's going to pay for itself in hours of enjoyment. My boys LOVE it.

Tanya
Ottawa, ON, Canada
I'm a SAHM running after three young boys, and trying to fit sewing and other crafts into my hectic schedule of playing, cooking, laundry, shopping, alterations & other activities. 'Sew' many projects to tackle and so little time.