skip to main | skip to sidebar

My Husband Had An Affair & Broke My Heart

It's hard to believe it has been almost a year since I've posted to this blog. I used to enjoy reading other blogs and posting my own projects, but last year, life started to go wrong. This is hard to write about (and my apologies, there's nothing crafty here), but I feel I need to release it.

First, while still pregnant with my third son, a lump I've had in my neck started to grow aggressively. I was scanned and tested and biopsied, and am now waiting for a (presumed) cancer removal surgery in July. It's a lot to process for a mother of young children, but I am hopeful.
In October, my third son was finally born a couple weeks past due. During a routine ultrasound and biophysical profile, he was found to have a heartbeat, but was completely non-responsive (flaccid, no movement, no breath attempts)and was born via emergency induction. I called my husband to say the baby had to come out right now, and could he please come to the hospital. He didn't seem excited about the prospect, but I put it down to stress. It was an excruciating birth full of anxiety, as the outcome for my son was unknown. Thankfully, he arrived safe and sound -- a little smaller than my other boys despite being overdue -- but in seemingly good health. He's a great baby, and I love him to pieces.

Then, there is the matter of my husband, a man I thought was my best friend and someone I could always count on. I was terribly wrong. We had been having some marital strain since after he took an extended business trip August, but we pulled things together in December and had a fantastic holiday. I was in love all over again.
Little did I know hubby joined a dating website called Plenty of Fish back in August after cheating on me while away on his supposed business trip. On Jan. 3rd, he got a response to his ad. A local woman, a mother who was cheating on her partner, contacted my husband. He had drinks with her a day or two later, and he had sex with her two days after that in the back of her truck, along a dark road in the middle of a freezing Ottawa winter. Of course, I knew none of this. I'd had suspicions, but he always denied everything, told me I was acting ridiculously jealous, and to stop playing mind games with him. Eight days after his first online contact with this 'woman', he broke up with me in the middle of the night as I nursed our newborn. He said some really ugly things...things I can never have my children know. 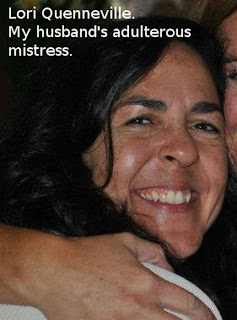 He said he wanted more than work and 'parenting', and that he was leaving me to pursue those things. To say I was devastated would be a huge understatement. I felt empty, shocked, betrayed, anchorless. Of course he neglected to tell me he'd been having sex with someone else. That came out later, along with revelations that he's been having emotional affairs online for years, and that he bought condoms in case he 'had sex accidently' with some woman he met while out running during his last 'business' trip. He also admitted to drug use, secret friends, and other things. Who was this man?

Over the course of the next two months, I had to endure him trying to buy a house behind my back, paralyzing me financially, listening to him on the phone declaring his love for her, calling me a whore and other names (the irony!) and watching him go out to spend nights and days with her. He was obnoxious about it. He even called the police on me one night because I followed him on his way to see her (he took in my car without permission) after they had supposedly broken up. I felt broken and defeated. At some point, he admitted he had lied about using condoms, and revealed he had been having unprotected sex with her. Although he claims it didn't 'occur' to him, that meant my baby and I had been exposed to whatever STDs she might have. My sweet, innocent baby boy won't get a clean bill of health until he's two years old. There were times the man I married was with both me and her intimately within hours of each other (he kept a log of most of their sexual exploits, which he later sent to me). I couldn't believe this was my life. It still makes me sick to think about his choices.

We tried to hash out separation details. We would agree to certain things, like trying to allow the kids to stay in our house instead of selling it, visitation, etc., and then the next day after he spoke to her, he would renege on all of it. She desperately wanted him to sell the house.

Finally, one day near the end of February, I heard him crying upstairs in the bathroom. As much as I hated all he had done to me, I still loved him and so I went up to comfort him. It was incredibly difficult, and I felt ill talking to him about her. But I did it. My compassion didn't seem to have an impact. The following night he sent her an email stating she was the best thing ever in his life, the most amazing love making of his life, that he was bound to her forever, and that maybe he should try to take some time to calm me down to make the separation go easier so they could be together again in a month or so. He said he could still see her during the day, but no more overnights. Thirteen or so hours after he sent that bit of vileness, he came to me and said he'd made a terrible mistake, still loved me and our kids, wanted to save our family, etc.

This sudden turnaround seemed suspect to me, but he seems to have seen the error of his ways and corrected his behaviour. We have been going to couples counselling. Is it enough? I don't know. I'm incredibly hurt by his many betrayals (there is so much more than I have written here), and I resent both him and her.  I don't trust him and have very little respect for him as a man right now. I worry about the kind of example my kids will have -- particularly if my health fails further. I love him in a deep place in my heart, but all the little feelings of affection I used to have -- that flutter when he walked into a room, the urge to hold his hand or kiss him or touch him in passing, the feeling of having a solid best friend -- that's all gone, and I wonder if it can ever come back.

So that's why I haven't been posting. Surviving this betrayal and upheaval has taken literally every ounce of energy I have. I want and need to get myself back, to start doing the things I love doing again, so hopefully I will have more positive things to post in the future. Thanks for reading.

New comments are not allowed.

Tanya
Ottawa, ON, Canada
I'm a SAHM running after three young boys, and trying to fit sewing and other crafts into my hectic schedule of playing, cooking, laundry, shopping, alterations & other activities. 'Sew' many projects to tackle and so little time.